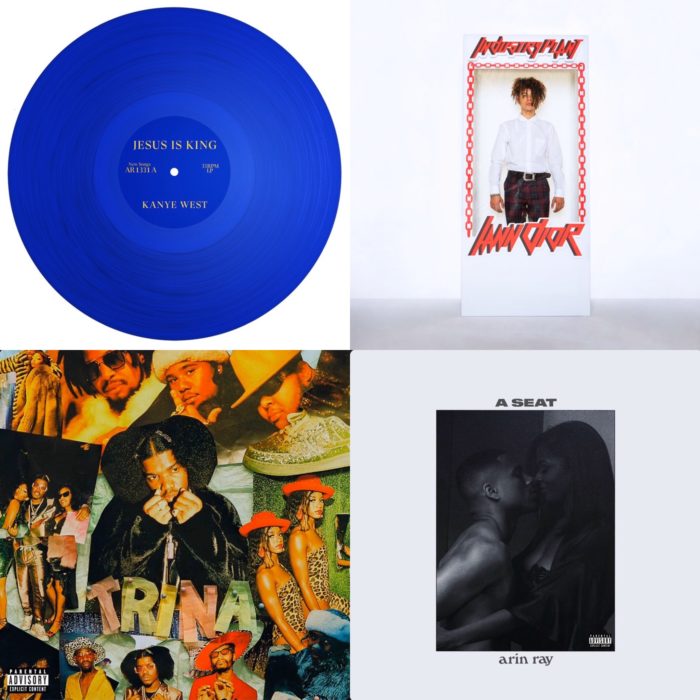 October 25th was probably one of the best Friday’s for the Hip Hop community, Loads of music was officially released to music listeners, including the long-awaited project Kanye West. These are the newest songs you should be listening to right now:

Kanye’s “Jesus is King” has been a long-awaited project in the hip hop community, it’s too early to say the overall rating for the album. With Kanye projects, his work tends to build on people’s preferences for his music, so this album may be popular listen in the near future. Overall, very unique concept and definitely not surprised Kanye would think of such an idea but my favorite song is definitely “Everything We Need” featuring Ty Dolla $ign & Ant Clemons.

The Internet Money sensation released three singles off his upcoming album “Industry Plant”. For the longest time, there were many beliefs that Iann Dior may have been an industry plant from a record label and I think the title of his album definitely will catch an eye to all his listeners and people who don’t know about his musical talents. Definitely a big fan of his track “Strings” featuring Gunna, it seems that Gunna and acoustic guitar hooks are always an impeccable formula for his music. Really excited to hear the rest of Iann’s music for this album, was very pleased with his past project “Nothing Ever Good Enough”.

Oh, Smino, how are you ever one of my favourite artists in the hip hop game. This song is so good, the collaboration with Kenny Beats as the producer definitely suited this track and Smino’s flow is so so good. Definitely one of my favourite tracks released on October 25th, even considering Kanye’s just released his album.

I obviously had to include some R&B in the mix with one of the hottest R&B artists in the game right now, Arin Ray. I love everything that Arin has released, since the beginning of his career, this song was definitely a little different than others. It felt like the song was an actual story, for the reason that it was over 7 minutes long but definitely a song you would play when you around with your shorty. Overall, great track, still waiting on more Arin Ray because I can’t get enough.

“IT’S AJ TRACEY”, haha the British artist officially released his debut album and to be honest I don’t know how I really feel about the overall project. I don’t know why but for me, AJ’s songs always take time for me to really enjoy and choose which are my favorite. All I know is that AJ has blown up in the North America region, I still remember when he was predominately lowkey but he’s really gained attraction in 2018/2019.

I swear Gunna has made appearances on so many tracks on October 25th, this is definitely a record of some sort. Anyways, Roddy Ricch and Gunna bodied this track, always been a big fan of Roddy and it’s great to see he’s been collaborating with the biggest artists cause he has the talent to do so. I’m just waiting for his official album, I wanna see if he can release a project that will be diverse as most of his songs do have a similar flow.

Guapppppppdad, killed this project. I swear everyone in the music game has worked with Guapdad over the past year, and clearly you can see he’s kept some gems to be released on this album. This project consisted of so many features, with my favorite being “Stuck With It” featuring Tory Lanez while “Gucci Pajamas” was already a banger when it first dropped. I think this kid has got loads of potential, and this project will solidify my reasoning when the hip hop industry dives into his sound.