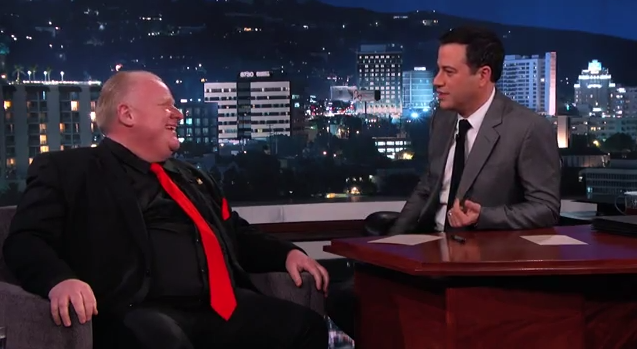 Check out the Toronto Mayor Rob Ford appear as a guest on the Jimmy Kimmel show. There are 4 parts to the interview with a brief summary to each clip. Find out about Rob Fords explanation for all the crazy incidents that’s been happening. Rob Ford shows a great sense of humor and talks about what he has done aside from all the crazy headlines on the news. He appears to be a man who’s down to do his job while enjoying it at the same time. He is not your average or ordinary mayor. Check out the video below to see what he has been up to!

Part 1 – Mayor Ford explains why he agreed to being a guest on the show and tells us why he hands his phone number out to everyone. Jimmy reads some negative internet comments he received about having Mayor Ford on the show.

Part 3 – Jimmy plays some classic clips of Mayor Ford and asks him to explain each of them.

Part 4 – Mayor Ford talks about his re-election campaign www.robfordformayor.ca and touts his record of saving money for the city of Toronto. Jimmy offers some suggestions on how the Mayor could deal with some of his problems.